Call Us Message Us Search Listings

Save Your SearchRefine Search 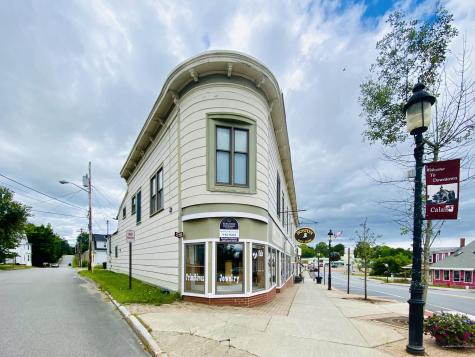 This historic property has been owned and operated by the same family for over 100 years and is one of the original buildings in Downtown Calais. 291 Main St. consists of two commercial rental units on the ground level; a larger corner unit that could be partitioned into two separate spaces, and another commercial space that recently housed a popular bakery. Four rented apartments complete the upper floor. Two-one bedroom and two-two bedroom apartments. This income producing property is located just blocks from the International Border crossing and the St. Croix River waterfront. Live and work from home...ideal for use as retail, restaurant, bar, or salon. Let your imagination run wild!

Join the renewed interest in Maine's most eastern city by investing in this handsome, completely renovated, 4,313 square foot, two-storycommercial building in the heart of the historic district. Named 'Maine's most resilient city,' Eastport was one of six cities selected from the America's Futures Project, and featured in the HBO film, 'Our Towns.' Named ''The Commons'' by a group of local women who purchased the building 18 years ago, this 1886 landmark stands among the other striking red-brick buildings in the national historic business district of Eastport as a symbol of its owners' tenacity & commitment. Informed by the Teddy Roosevelt quote: ''Do what you can, with what you have, where you are,'' this building contains four distinct commercial spaces, including two, two-bedroom short-term rental suites with decks & water views; and two street-level businesses. Completely renovated ''down to the studs'' in 2003/2004, the building is impeccably maintained, and has had significant improvements over the years, including the replacement of the rubber membrane roof; electrical upgrades; and two new boilers in 2021. Additionally, the sellers have nurtured the development of viable, ongoing businesses on both levels. Currently, the building includes a gallery and online shop featuring local artists, which is not included in the sale of the building. In addition, one of the street level commercial spaces provides conference rooms and office space. Two vacation suites, complete with kitchens, living rooms, furnishings, & appliances, comprise the second floor and do convey with the sale. Bring your own vision to this picturesque setting where downtown commercial spaces vie for attention with the sweeping water vistas that extend beyond the deepwater harbor and working waterfront out to Campobello and Deer Islands, Canada. 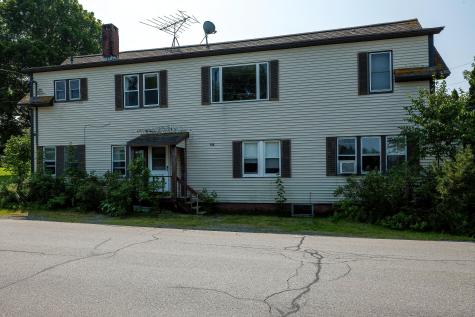 Great income property with 3 apartments plus the US Government Post Office lease in a separate building. Upper apartment is 3 bedroom 1 bath with great views out over the water and has hardwood floors and large bright rooms. The front apartment is 2 bedroom 1 bath and the back apartment is 1 bdrm 1 bath. You own the water frontage across the street so it's a great place to sit and listen to the ocean or go down on to the beach. The Post office lease is a separate independent building next door. Also see MLS# 1509626. 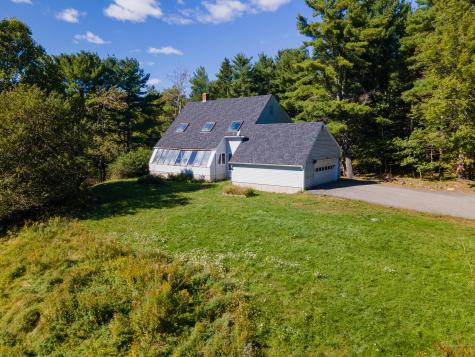 This rare find is set on a less travelled road in Bar Harbor, a large, private 8 acre lot with a saltbox home and an attached garage. An added bonus is it is located directly across from Acadia National Park land which is never likely to be developed. The house, outfitted with a solarium to the South and decks to the North, has great bones and is ready for your restoration. Other features include a Russian fireplace, decent sized kitchen, dining and living room with a first floor den and half bath with washer hookup. The second floor consists of three bedrooms and a full bath.Tucked away down a separate drive way is a huge barn with two (2) bedroom apartments. The apartments have current vacation rental permits and most recently housed year round tenants. The barn has high ceilings to accommodate all your toys and then some!All on a generous 8 acres of land with plenty of road frontage. 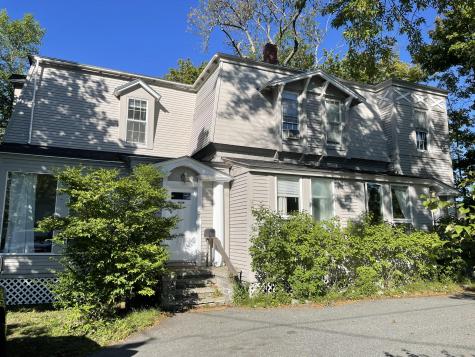 Looking for an established in-town investment property? This 2-unit apartment building includes a 3-bed/2-bath fully furnished, turnkey vacation rental on the ground floor and a 2-bed/1.5-bath apartment with private entrance on the second floor (currently used as a year-round rental). Many recent updates including new roof, propane boiler, hot water heater and exterior paint. Plenty of options for this charming in town building- continue to use both units as rentals, owner occupy one apartment, purchase for staff housing, professional office space or convert into a single family home. Off street parking too!

Rare opportunity to own two houses for the price of one. Investors take notice! Live in one house and rent the other out. Enjoy being close to the waterfront, shops, grocery stores, and restaurants. Just 20 minutes to Acadia, and 40 to Bangor International Airport. The Ranch home was built in 2006 and that home is currently being rented out as an upholstery shop, but is designed for a 2 bedroom/ 1 bath home. The Cape home was built in 1900 and has 3 bedrooms and 1 bath. There are so many possibilities with this property, you must come check it out for yourself! 2 acres provide you with a spacious yard for a fire pit or lots of room for other activities. Priced to sell. Also goes with MLS #1507044

Nicely maintained 3 Units on 2 acres, just 5 minutes to Ellsworth and 20 Minutes to Mount Desert Island. Live in the 2-bedroom house and rent out the (2) 1-bedroom apartments or use for employee housing. Great location for your Business or build additional units. Lots of possibilities with this 2 acre lot right on Route One, close to the Ellsworth/Hancock Town Line. Minutes away from the Sunrise Trail and east access to Downeast, Maine. Come see for yourself the possibilities and add multi-family rental units or a new business property to your portfolio today. No Showings will be scheduled before Sunday, September 5th, 2021. Tenants & pets on property, 24-hours notice for showings.

This classic New England Farmhouse has 4-5 potential bedrooms and a large out building/garage that has plumbing run to it. It was currently converted to a two unit with apartment in the back but could easily be turned back into a single family. Beautiful private back lawn area. Drilled well and new septic in 2008. Listed as residential also see MLS#1507168

Multi unit property located outside of Bar Harbor with various Income opportunities. Property consists of a two story Gambrel with a second story 2-bedroom apartment and a first floor 2- bedroom apartment consisting of 2610 sq ft of living space. Both with wood floors and private decks. The property also has a rental 1- bedroom,1-bath cottage (796 sq ft of living space) with a detached 1- bedroom, 1-bath cabin. Ample parking and a large garden area. Glimpses of Cadillac Mt. and a quiet central location.Motivated Sellers.

Listed by The Knowles Company 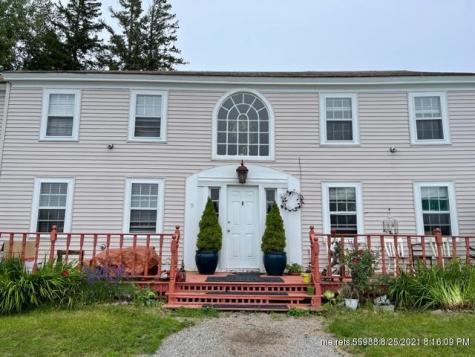 Eastport, ME5 and 7 Snyder Road

Water views without waterfront taxes and an untouched adjacent lot. This property has a lot of potential! The property faces west overlooking Half Moon Cove. The wee bit of acreage across the street is not buildable so you will never lose your view. This 2800' square foot two-story Federal-style building offers 4 separate apartments: first-floor studio, an in-law apartment, plus two additional 2-bedroom apartments on the second floor. There is a large ground level dreamy front deck. Adjacent to the house is a .22-acre wooded lot to add a garage, a second home, retain as a nice buffer, or to sell-off. You get to decide!Quoddy Village is surrounded by saltwater on Half Moon Cove, Cobscook Bay and Passamaquoddy Bay of the Bay of Fundy. Quoddy Village is part of the City of Eastport but just a mile on the outskirts. It has a lot going on- including a fun retail shop, a garden center, several artists with studios, and local fishermen for freshly caught seafood.

Looking for that additional living space for family, friends or potential a rental income? Look no further, this well maintained residence is located in Fletcher's Landing Twp and is just over the Ellsworth town line. The home features a primary residence with a living space of approximately 1560 sq ft. This home has an open concept living room, dining room, kitchen with granite counter tops and cathedral ceilings. It has two bedrooms and one full bathroom with new flooring installed throughout. The additional living space is attached but can also be completely shut off from the main living area or opened up to be just additional living space. This portion of the house has its own entrance, a deck and boasts 1040 sq ft +/- of living space with a full kitchen, living room, one large bedroom and two full bathrooms. All have stainless steel refrigerators, electric stoves and dishwashers. House sits on 1.91 wood acres! Only 7 minutes to downtown Ellsworth, 25 minutes to Acadia National Park and 30 minutes to Bangor. All has been freshly painted. Laundry room is 210 sq ft +/- with 2 washers and 2 dryers. There is a new 80 gallon high-efficiency hot water tank and a Kinetico water filtration system. Consolidated communication Broadband Internet is in place. There is a 24x24 one-car garage with workshop and storage. Sweet greenhouse on the property too! Located 4.5 miles from Ellsworth EEMS and EHS schools. Graham Lake public boat launch 1/4 mile away. Annual property taxes at this time are only $805! Home is move-in ready! Call today to view. Also listed as residential, see MLS# 1499850. Check out the 3D Matterport walk through.

Listing data is derived in whole or in part from the Maine IDX & is for consumers' personal, non commercial use only. Dimensions are approximate and not guaranteed. All data should be independently verified. ©2021 Maine Real Estate Information System, Inc. All Rights Reserved.

Mike & Emma REALTORS ® | Keller Williams Realty participates in ©2021 Maine Listings Internet Data Exchange program, allowing us to display other Maine IDX Participants' listings. This website does not display complete listings. Certain listings of other real estate brokerage firms have been excluded. Mortgage figures are estimates. Check with your bank or proposed mortgage company for actual interest rates. This product uses the FRED® API but is not endorsed or certified by the Federal Reserve Bank of St. Louis.